OCD/Anxiety over a plethora of irrational things and I don't know why.

Okay I think it's safe to say I have OCD. That as well as anxiety and depression. I've been on antidepressants (20mg Fluoxetine) for 2 years, and antipsychotics (0.5mg Flupentixol (2 to be taken each day)). As of recently my mind has decided to get really bored, and start worrying about stuff I would never usually gave a second thought about. It's been getting worse these past few months. I've just started worrying about stuff that are completely normal for no reason, even over things I don't have or used to enjoy at some point. I often question myself if I will ever get better from this. It has been getting me really down recently to the point where I don't feel I am gonna be happy for a very long time if not ever. I've wrote a bunch of threads about this before but I wrote this one to discuss the topics I am currently feeling anxious over at the moment.

Anyways I'm gonna get into the things that are making me anxious/have OCD in great detail. You don't have to read the rest of this thread if you do not need/want to.


Okay so I have game called Die Hard: Nakatomi Plaza on the PC, which is a really good game, I've had it for years. I was watching a vid of it on YouTube the other day and noticed that on one of the enemies (and it's the same with every character in the game) in a cutscene, their fingers are all molded together and it looks pretty awful. Which is normal considering these where the graphical limitations for a game that came out in 2002. I've always been aware of this and it is indeed completely normal, but for some strange reason, it took my enjoyment out of playing/seeing the game anymore. I'll link a vid and timestamp to explain what I mean (at 11:05) . Again I've always been aware of this and has never stopped me playing/enjoying the game. But because of my anxiety prone state I have developed these past recent months, I've just started to worry about it even though I know it's normal.

Another worry I have developed is the look of my new CPU cooler for my PC. About a month or so ago, I bought and got delivered a Noctua NH-D15 chromax black edition CPU cooler for my PC (that is still in its box). I've always liked the shape and look of this cooler but then, virtually out of the blue, my OCD started over that as well. Most specifically over the exhausts pipes on the cooler, on how they where quite far apart from one another (which not only is it normal but there is a good reason for why they are far apart in the first place). Here is a pic of the CPU cooler I bought: 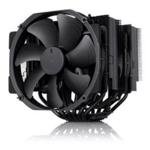 I also started to worry on how it will look in my new PC case I will be buying soon. Since the case I am getting is gonna have a windowed side panel, and I fear it may look too big and bulky inside. I am also worried that it may cover the RGB lighting on my RAM. Which to be fair I couldn't really care less about. I couldn't care about what the outside of my PC would look like, let alone the inside so why on earth am I bothering about it now, when I haven't even got all my parts yet. Which brings us on to my next worry: And that is the PC case I am planning on getting (that's right I haven't even bought it yet, but I've been watching a lot of reviews on it and I've already told myself that it's the one I wanna get).

Basically the case I am planning on getting is the Corsair 760T full tower case (Black & Red version). Which has a stealth optical drive at the front, with a button that allows you to pull it down revealing your optical drive (and yes I still use optical drives, I mean I still play Die Hard: Nakatomi Plaza). I'll leave a vid and timestamp to explain what I mean: (3:10). Again even Linus mentioned that it would've been cool if there was no button at all so that stealth optical drive can be completely stealth. Ever since I heard that, it kinda stuck with me, and I've been questioning a lot to myself recently about that button on and on how it would so much better without it. Not that I have ever bothered about stealth optical drives before because I kinda like to leave them on show anyway. I'm sure you can take the flap off so you can pretty much show your optical drive off anyway but I'm not certain if it's possible. I've seen vids before without it but I guess I won't know for certain till I get the case.

Anyways, these are the types of things that I've been worrying about recently (I know pretty pathetic right?). Hopefully they will pass with time, but I kinda want that time to come now

I can completely relate. Some of the stuff I've felt anxious over is completely irrational, and it's even worse when you don't even know exactly why you feel that way. One thing to keep in mind about anxiety is it plays tricks on you, it makes you feel (especially if you're having panic attacks) that you're in some sort of danger. In reality however, you're perfectly fine, it's just the stress from struggling to make sense of your irrational thought process.

I hope it helps to let you know what you're most certainly not alone with this. I could obsess over something that annoys or triggers me for hours, days, weeks even. Like you, it also affects my ability to enjoy things because my mind is fixated on whatever it is that has triggered me.
You must log in or register to reply here.
Similar threads