IMAGINE PEOPLE AS NPC’S IN A VIDEOGAME | BUT BE POLITE

I'm writing a blog on social anxiety and this is one of my entries. Please don't consider it spam.


Let me give you this example…

Imagine that you are in a middle of a crowd, the phone rings and the caller gives you some urgent news, forcing you to run for a meeting. You start running, but then you decide against it because people are watching, and then you proceed walking fast instead, not managing to get there on time. You lost the meeting and got impaired.

Another day, some other person called you on the phone, the conversation quickly escalated to a heavier tone and you started arguing loudly, but then you realized where you were and backed off, since you were surrounded by people which you though were listening.

Finally, you asked for the price of a product displayed on a stand, the owner has already told you twice, but you couldn’t listen, and you didn’t asked again fearing of either becoming unpolite or receiving an unpolite answer.

In both three cases, you backed off only by fearing other people disapproval.

Have you ever thought that being an average person in the real world, there are lots of innocuous actions which you don’t normally execute like loudly talking to yourself in the middle the street, dancing, singing, clapping your hands, making certain noises, addressing people in an unconventional (although polite) way or the most common in case of boys – approaching a certain beautiful girl, especially if there are other people around. But the list goes on and on.

Among the reasons that block you there are the following:

Fear of Confrontation: the fear that someone more tenacious than you could confront you publicly about something you’ve done. Sometimes this feeling comes connected with the fear of physical harm;

Fear of Rejection: the fear that (especially the opposite sex, but no just) rejects your approach, which might hurt your ego. This feeling gets even worse if you know other people are looking;

Fear of Identity: the fear that your identity as you know it gets harmed. Not just the way other people perceive you, but also as you perceive yourself;

Fear of Punishment: I believe this is more like a social fear, but we used to be punished a lot as children when our behavior was disapproved by adults, so we keep this fear as adults ourselves. We all know there are ways of being punished as adults – the authorities and the law are the most common examples, but also you can be punished in your job or in the social groups you are in.

Despite all of that (and I’m not encouraging illegal behavior here) all these reasons reside only in one single place – your head.

CONFRONTATION is normal. Is normal for people not sharing the same opinions about things and start arguing on that, but you can just turn your back and leave, because most cases end up just by doing that.

REJECTION is also normal, you don’t expect everyone to like your approach, and most of times people reject you out fear, shyness and social acceptance, not because “they don’t like you” – also keep in mind that people don’t reject YOU, they only reject your approach in a precise way and time.

IDENTITY you create every day and you should not be ashamed if the reality doesn’t match the romantic idea you have of yourself in a precise moment, because in most of times it doesn’t. And that's normal. Keep facing reality and destroy your identity and the next day you will be cured and stronger, if you manage to get the right thoughts. Sometimes might be wise to create a strong identity with people from your job or social circle, but do you have anything to lose with people who don’t know you? Use those as guinea pigs and learn from their reactions.

Finally, in most countries you don’t have to expect PUNISHMENT, unless you go illegal, which as I told you, I don’t encourage at all. Also keep in mind that you also must adapt to the place you currently are – I won’t advise you getting to your job place wearing a swimsuit or in most cases to flirt with one your coworkers, especially if you aren’t good at it. Use strangers to test your abilities. Also take special care not to defy the laws of the country you are into.

All in all, we humans are flock animals, designed to live in small groups in those primeval ages, where physical and offspring survival might have depended a lot of the acceptance by the small groups. That can be explained as simply as that: either you obeyed the group rules or you’d be killed or expelled from it and faced a certain death either by thirst or hunger or even by the tusks of some wild beast.

Today we live in a safe, multicultural and globalized world where group values aren’t as much barriers as they were in the past, where is also easy to find another group with another set of rules and is very unlikely to get killed just by ignoring other people’s validation. But we have our biology to blame. Despite we’re living in the 21th century, our brains so little have changed for the last 100.000 years, in a biological standpoint. We’re still cavemen. Cavemen in suits, that’s what it is.

Now let’s just imagine those modern videogames, where reality is by this time recreated with so much integrity. There you can play with much liberty as you want (and of course I’m not referring to the also portrayed physical or homicidal violence) as well as expressing total freedom in the interactions you do with NPC’s (Non-Playable Characters) – In some cases you can either say bad words to them, ask them for strange stuff or portray some strange stupid act right in front of them, causing a reaction so much vivid in those modern installments. And yet, your real self, the player, despite causing the actions, don’t get emotionally affected by it. It’s all in the game, as you can experience. Can you imagine doing all that stuff in front of real people like your character does in the game? And why not?

If the answer was as simple as “they don’t live in the same universe as me”, why can’t you do the same and with the same freedom towards some other person who lives in some other part of the world which you might contact through internet, but most probably you will never meet in person? – despite living in our real world, they won’t influence your life as much, so is like almost living in another universe, isn’t it?

Well, as pre-programed software, NPC’s don’t judge you whenever you fail a mission or take some liberty with social rules, and that is the main difference from real people, so you can play with them as much as you want, without feeling any bad emotions. Real people do judge your actions, and despite being far away and not directly influencing your life, there is some part of your brain which reacts to that. That’s also biology taking part. Damn biology.

The question we can make is: can an opinion (judgement) of someone you don’t know in a place you don’t usually go or you are known, far away from your current life affairs affect your life? In 99% of the cases they don’t, and half of the one per cent left, those effects are good instead of bad, so use those settings for training the more pollical incorrect ones like flirting or asking for strange questions, just for practice. Although good interactions, like “hello”, “how are you doing?”, “goodbye”, etc. by the contrary only bring good effects, so try them out more often even with those people you know. Don’t expect a reaction, don’t expect those people to recognize it and be polite to you by return, because most of the times they are, but sometimes they don’t. That’s just how life is.

Anyways, just focus on your process of growing as a social being, do what you must do, and don’t think much of people’s reactions towards you. In a way, they are just like NPC’s in your own game. Interact with them, deepen relations with them if that’s the case, but don’t care about their negative reactions, especially if there’s nothing negative to complain about. They’re just like NPC’s in your own game. Do you care when an NPC offends you? So why should you care about when a real person does? Same way, do you care when a dog barks at you? No of course not, and dogs are not NPCs. 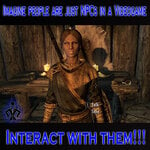 I think this is good advice.
When i was young i was fearful of many socially related issues. This was because i was in a social structure (school, peers etc) rejection, isolation or bullying were the consequences of expressing myself to the fullest or exploring/developing my personality.
I think isolation has taught me to value my own company and live life by my standards. It was refreshing to finally find my own morals and values and it has helped me to stay clear of those who have bad intentions or who are toxic,
Without this confidence in myself i am open to be abused by anyone who decides to call me a friend. Before this found confidence, a friend was someone who i would regret ever knowing.
Now i live by my own standards.
You must log in or register to reply here.
Share:
Facebook Twitter Reddit Pinterest Tumblr WhatsApp Email Link