I need help with maintaining focus

I'm an artist. Mostly digital art, but I also write, sometimes teach needle felting, or make art with nearly any material I can find. My goal is to be a comic artist and publish stories, either physical or just webcomics.
I am also a gamer, I prefer games that are creative, atmospheric, or survival focused. My favorites are Minecraft, Subnautica, and Anno 1701.
I've been diagnosed with Aspergers, Generalized Anxiety Disorder, ADHD, and suffer chronic migraines. I have prescriptions that effectively manage my GAD and somewhat mitigate ADHD. I see a therapist every six weeks; my anxiety gets substantially worse if I miss my appointments though I have no idea why it helps.

Even though everything seems well managed, I still don't feel like I'm able to be productive. I haven't "completed" any of my projects for months, I just lose interest and move on to another.
When I first started taking Concerta for ADHD I felt great. I was able to complete artwork, and for at least a week I fully completed a picture every day. However, mom didn't seem to like it as much, she thought I became a little manic or hyperactive. I've now been taking the drug for two years, with small dosage increases along the way, but I've never felt that sort of productivity since.

I also get minor anxiety attacks, but I don't feel like they're much of a problem anymore. I treat them like my severe migraine episodes: just take the day off. Even after the attack I'm mentally exhausted so there's nothing I can do except take it easy and go to bed early.
But my anxiety attacks aren't 'normal', they're not really episodes of anxiety or depression. I tend to call them "frustration attacks" instead. There are two types. The first: an attempt to draw doesn't turn out right. Trying to fix the problem makes it worse, so I change my focus to a simpler subject or activity but it's too late. My patience is at 0 so even minor obstructions (spotify takes 2 full minutes to boot, I can't find a video on netflix that I like) risk driving me to tears. These used to happen a lot more when I was in school, and I've gotten much better at identifying and diverting those attacks since.
The second type only started occurring after I started my ADHD medication. Basically, I become extremely motivated to be creative but lacking any inspiration, like an extreme art block. I end up just bouncing around between various activities, unable to focus even long enough to boot up a game. Luckily these attacks don't last as long or leave me as exhausted as the first type.

Alright, that's everything I can think of to talk about. My inability to focus and complete projects is my main concern, but I'll talk about basically anything, even if you just want to hear more about my writing or which games I like.
I know this is only the welcome forum so probably not the best place for long discussions, but I really don't know which forum my problems actually fit into. I'd love suggestions on that too.
R

What kind of art do you do?
what kind of comics do you want to do? Horror, romance?
stay safe
I

I draw a lot of anime-like characters, but my favorite is heavily stylized animals.
All of my writing tends to be fantasy adventures. Magic, dragons, etc.
Here's my most recent scribble. His name is Sven. 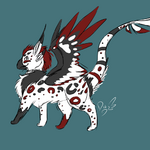